The weather was warm and sunny all through the three days of the South of England show. Oaklands pigs took 9 show pigs from 5 different breeds, as well as a sow with her 8 piglets for the pig village. That involved two trailer loads to get everyone there on the Wednesday setup day.

Greta the Old Spot won Best of Breed, repeating her win of the previous year.

Tara the Tamworth then won her Best of Breed, again a repeat of her 2017 win.

We also won best Landrace at last year’s show with our junior boar, but this year we again won Best of Breed but this time with our July Gilt Lorna.

So we once again had three pigs in the Interbreed Championship which was held on the Friday. Sadly no awards there, with the Supreme Champion being a Large White and the Reserve taken by a Berkshire. 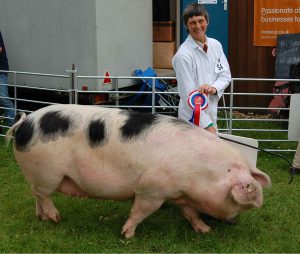