BERTHA  our British Saddleback born in July 2015 took the Best in Show spot in her first outing at the Heathfield Show today.

We were also pleased that INCA a large Black boar born in January this year also won his class and was contesting for the Best in Show slot too.

His sister EBONY did well coming second in a class of over a dozen pigs of her age.

And great big LOLA the Landrace was just pipped into second place by a large saddleback sow in her class. So the show season is off to a flying start – more news to follow …. 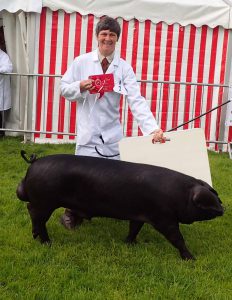