With the agricultural show entry forms dropping on the mat everyday, it is time to decide which pigs will be going to the shows this year. We usually keep back 3 or 4 in each age category and grow them on before we decide which ones will be kept. Here is a group of our July and September born saddlebacks along with an interloping Landrace gilt. It is very hard to breed the perfect pig and the one with the best teats doesn’t have the best markings and the best shaped one doesn’t have the best legs, so you just have to choose the one with the most positive features, that you think the judge might like in the show ring on the day. 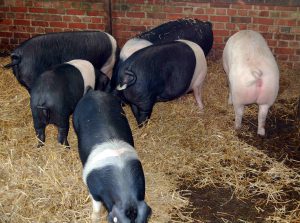 Pigs are shown in age categories with separate classes for boys and girls.

There is a class for Adult Sow – which can be any age from 1 year although most sows at about 5-6 years old are getting stiff on their legs so do not move so well around the ring.

The next class is for pigs born after 1st July. So during the 2018 show season we will be showing pigs that were born after 1st July 2017. Pigs in this class can be born from July to the end of December that year, although obviously those born later in the year will not be as big and impressive as one born earlier and are therefore less likely to be in the awards.

Some shows (but not all) will also have a born after 1st September class. So again we have chosen some pigs that were born close the beginning of September 2017 for this class.

The final class and the one that usually causes chaos in the ring is those pigs born after 1st January, so these are shown in the year that they are born. With shows starting in April and May these girls will only be 4 to 5 months old when they go to their first show, so haven’t had much time for training and generally take off round the ring with the handler in hot pursuit.