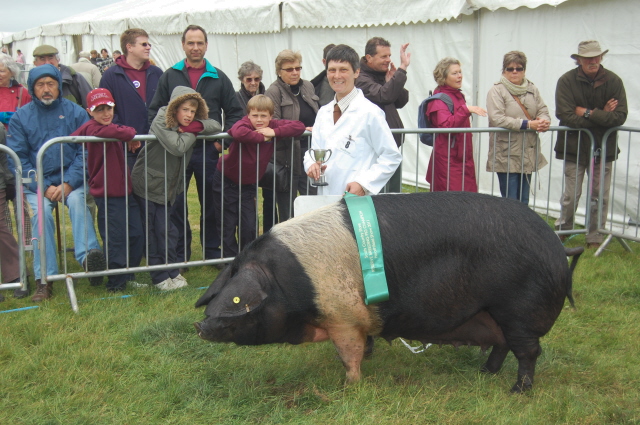 Amy takes the Best of Breed at both the Heathfield and Surrey County Shows.

Our 2011 show season got off to a flying start when 4 year old Amy won Best of Breed at the Heathfield Show on 28th May, and then went on to win Reserve Best in Show. We were especially delighted as Amy is one of our own home bred sows, and in addition 3 of the Saddlebacks contending for best of breed were our own homebred pigs. A few days later …

Amy repeated the sucess by winning Best of Breed again at the Surrey County Show on Bank Holiday Monday. This time she was not so lucky for the Best in Show places, but all the pigs we entered won prizes so we were really pleased.

It was Best of breed again at the Singleton rare breed show on 17th July, but this time the title was taken by our September Gilt Hilary who beat both Amy and our July gilt Megan. We were pleased once again to have 3 of our homebred pigs competing for the title.

This time Tabitha, the tearaway Tamworth, also redeemed herself by winning the January class up against 8 other pigs including Large Blacks, Berkshires, Saddlebacks and Oxford Sandy’s. But she was still lively and did still give me the run around in the ring (obviously just to show off her flowing movement !)

Posted in gallery, Our Saddlebacks.