We had another good show at Cranleigh on 2nd August. First out again was Hilary our Saddleback sow who won her class. She was followed by the gilts born in July 2013 which was a strong class, eventually being taken by the Old Spot pictured at the rear. Lola the Landrace came a close 2nd, but she let herself down by not moving well around the ring. Next in was Edna the September born gilt who also claimed a first and lastly the little January Saddleback Gilt Bunty who managed a third. 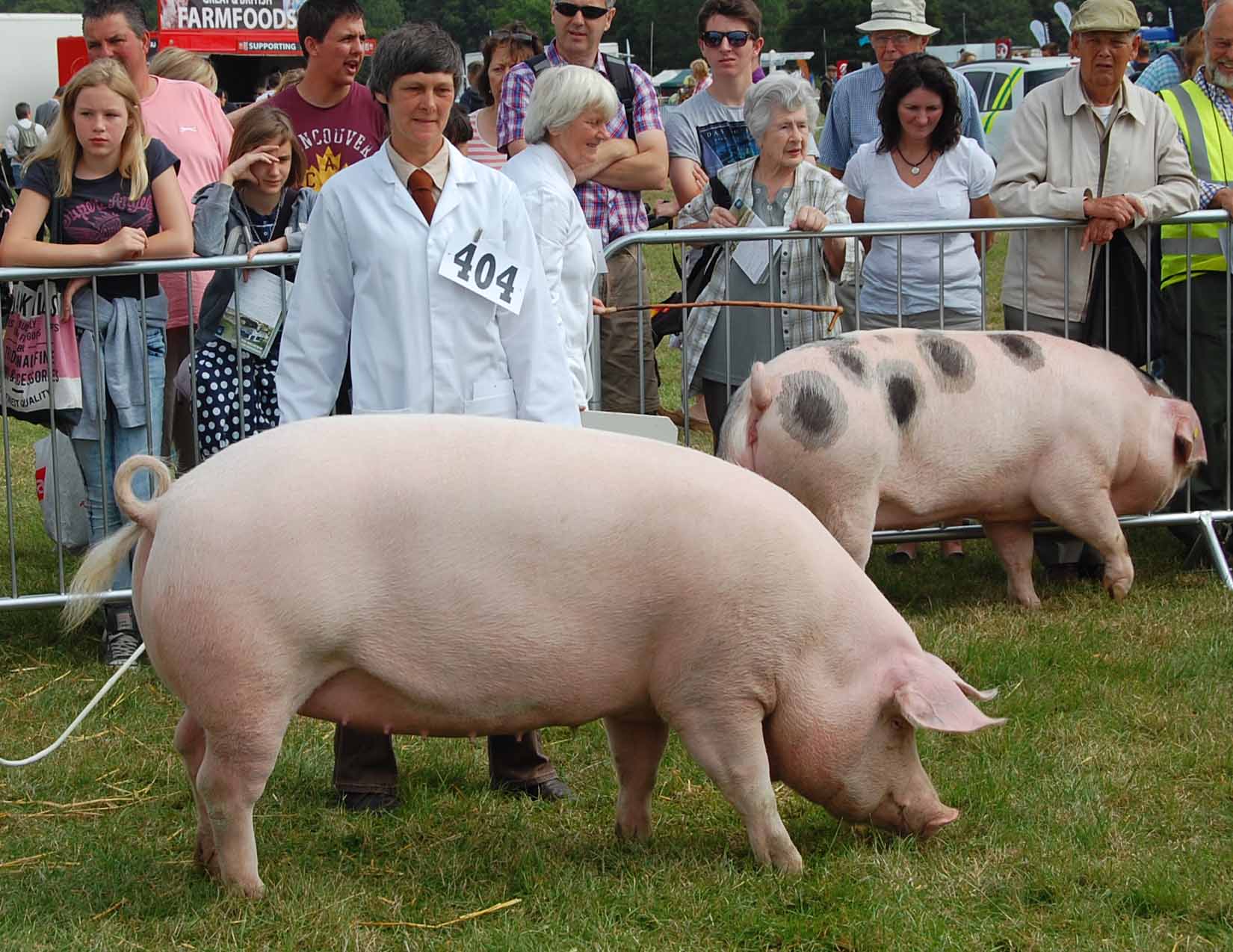 So just like the Singleton show, Hilary and Edna were both out again to contest the Best in Show. With two Oaklands Pigs already in the ring, the judge Richard Lutwyche then asked me to bring Lola the Landrace out again.

Unfortunately she still did not want to strut her stuff and therefore missed out on the Reserve Champion prize. 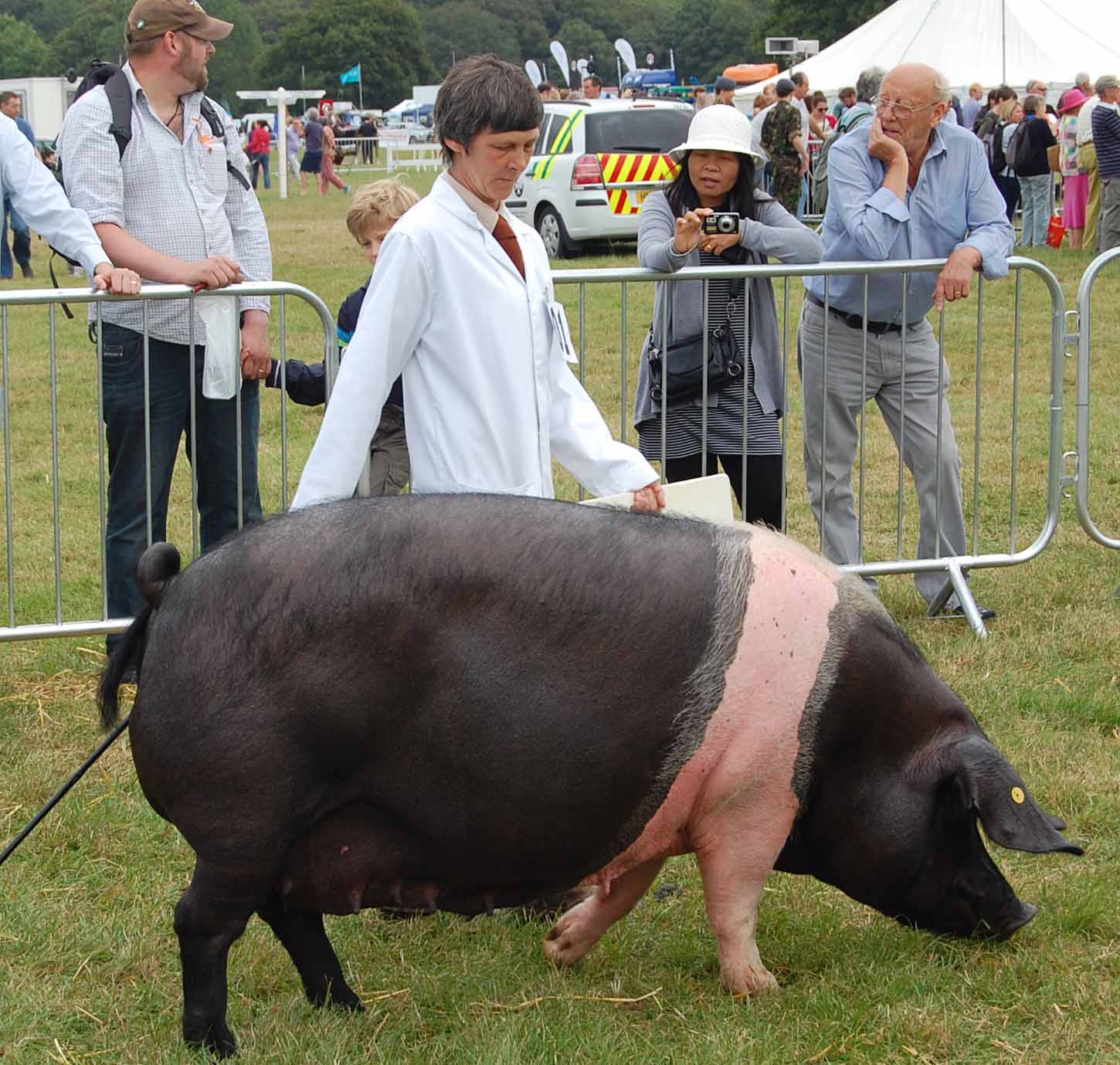 The Singleton rare breed show was held on Sunday 20th July. The pig classes are divided into white breeds like the Middle White and Lop, and the coloured breeds such as Saddlebacks and Old Spots etc.

First up was Hilary our three and a half year old sow who took first place in the sow class. She was followed by Harriet a gilt born in July last year who also won her class. There was another first place for Edna, our gilt in the September age group and bringing up the rear, Bunty our little gilt born in January this year who came second in her class.

That meant that there were three Oaklands Saddlebacks in the ring contesting for the coloured Championship. Although we were pipped at the post for the top slot, Harriet took home the Reserve Champion award. 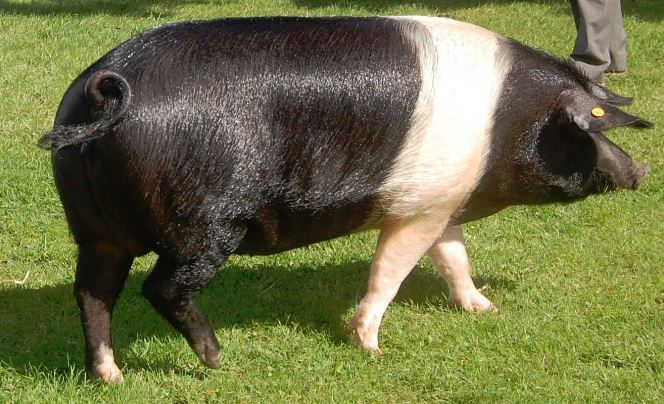 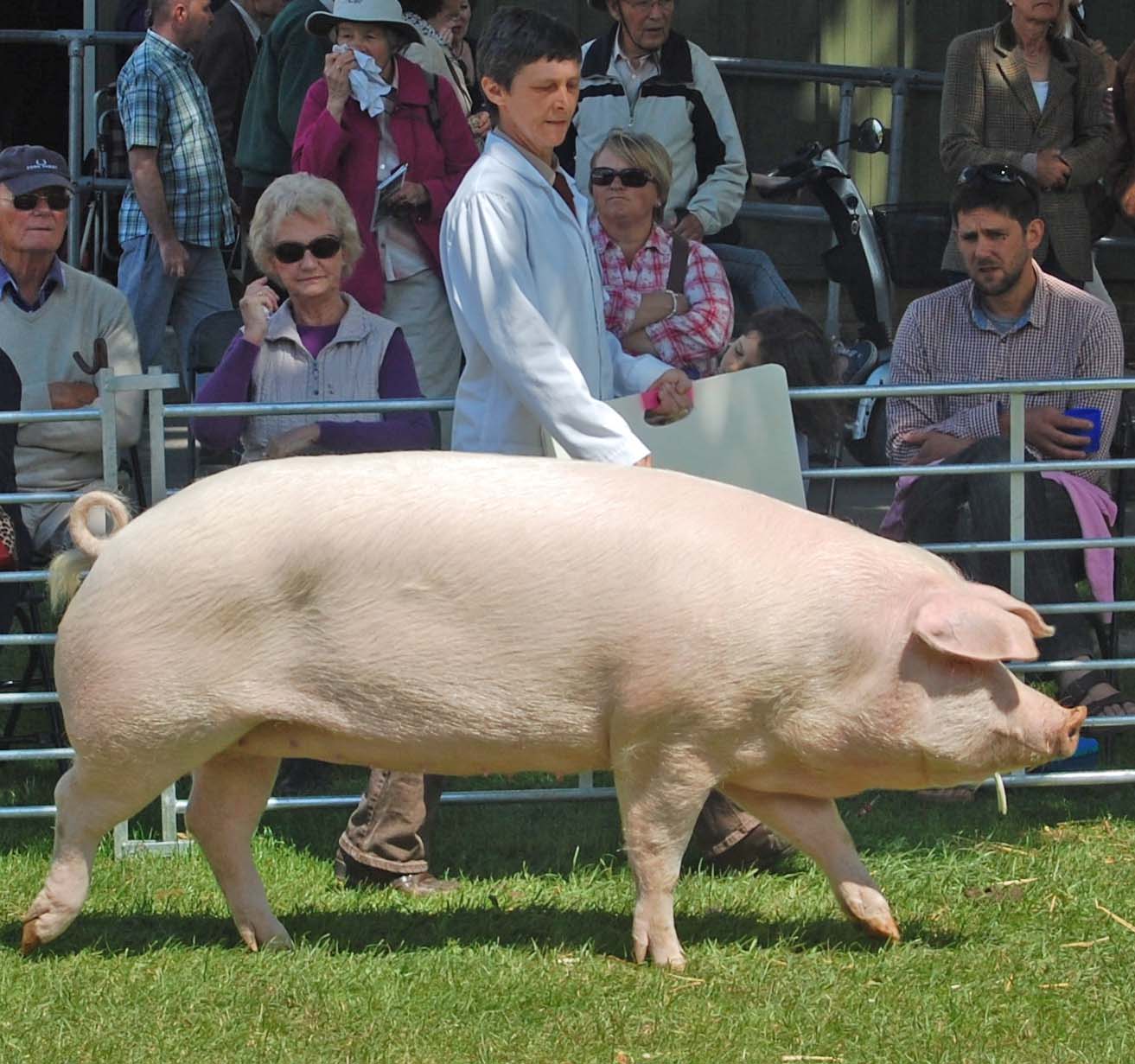 “HER NAME IS LOLA – SHE IS A SHOWGIRL” the words of the song rang true at the South of England show, where Lola the Landrace took Reserve Best in Show. We were surprised to win her breed class against strong opposition and then even more delighted to win Best Modern breed. That entitled Lola to compete for Best in Show, which was judged on the Friday. A large black took the top slot and Lola came in as Reserve Champion.

Whilst the rest of the show team couldn’t claim any firsts there were plenty of 2nd’s and 3rd’s. The 2nd’s going to Gladys the Old Spot in the Breeding Sow class and another second to Bunty in the January born saddleback class on Thursday and then Edna the saddleback also came 2nd in the interbreed September class on the Friday.

The 3rd’s went to Hilary in the Saddleback breeding sow class and Harriet in the saddleback July born class.

And then we rounded off the day by winning the best livestock exhibitors display. So all in all, great results at the South of England for Oaklands Pigs.

Gladys the Gloucester Old Spot won a big rosette as best old spot at the Surrey County show on Bank Holiday Monday. Although she is a four year old sow weighing around 300 kilos (that’s 48 stone) she can still move around the ring. She wasn’t so pleased however at winning “The Grumpiest Pig” award in the novelty classes. 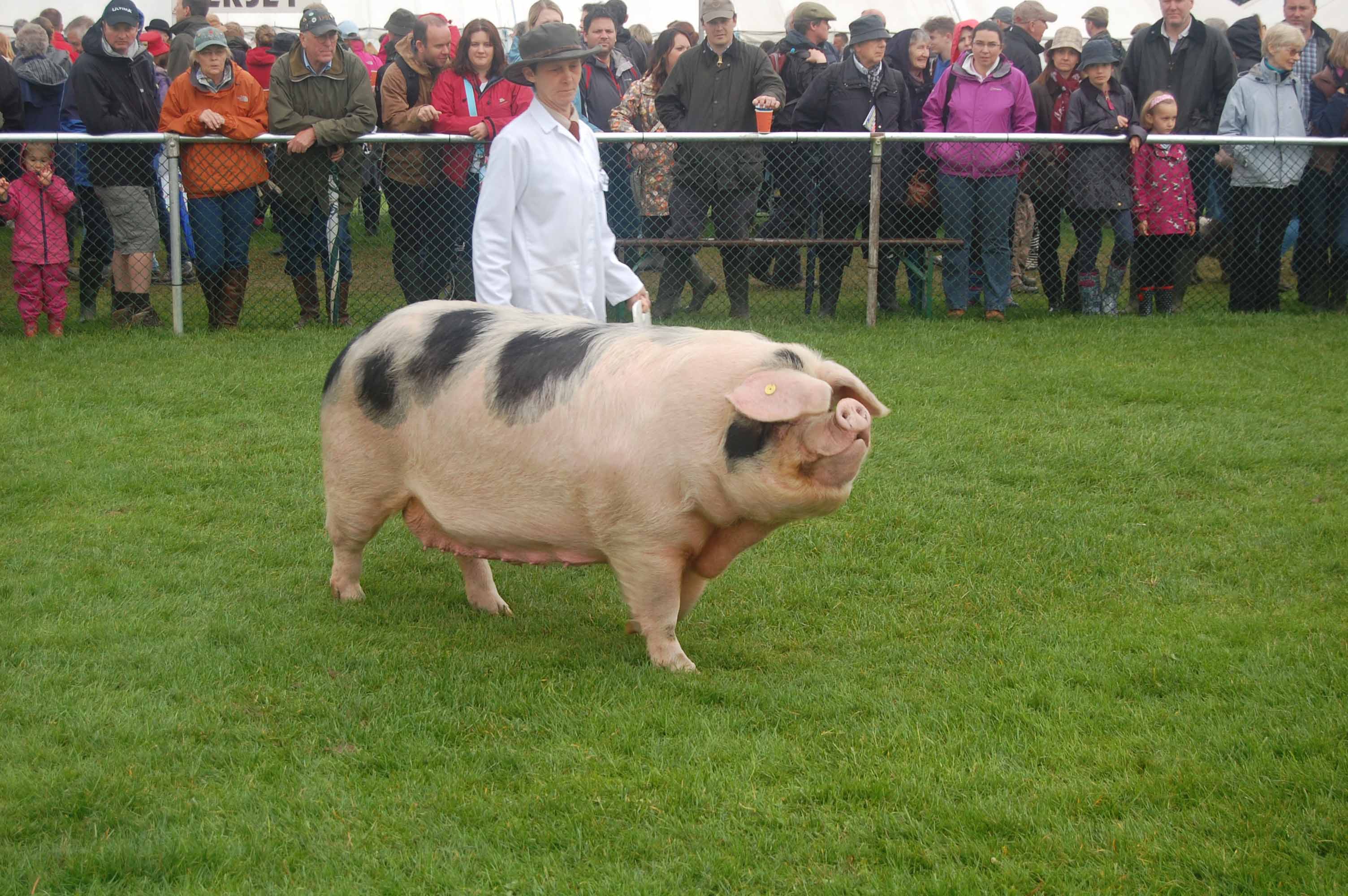 As at the Heathfield show, the Welsh pig took top honours, but we again came second and third to that winning pig in our breed classes. But this time the roles were reversed with Lola the Landrace taking the second slot and Harriet the Saddleback coming third.

Lola and Clare also won the pig most like it’s owner, I think it was the ears ! 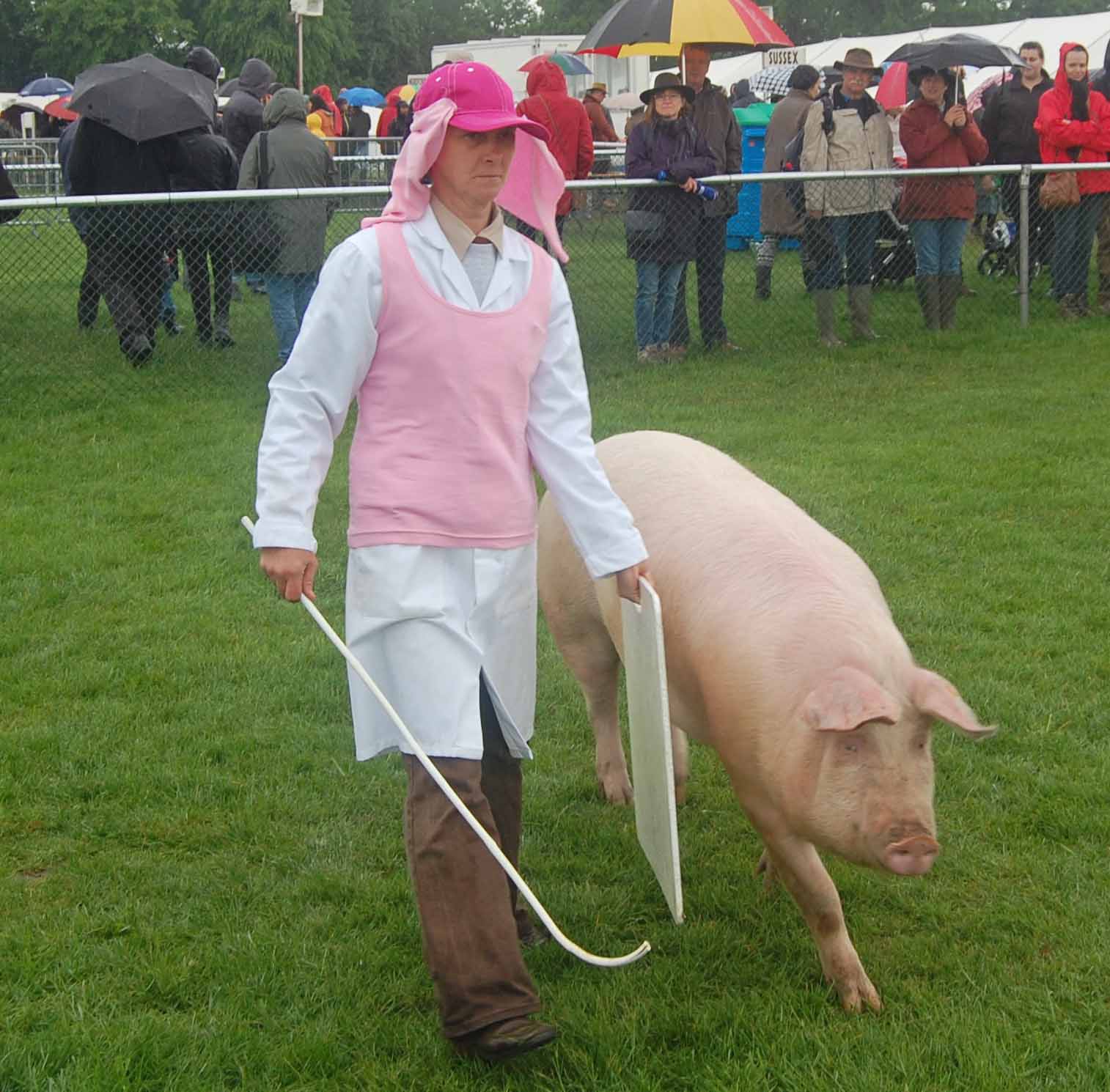 It was however a rather wet day, but that did mean lots of people visited the livestock marques especially during the downpours.

The show season got off to a good start with all of our pigs winning prizes at the show. Harriet came second in her breed class to a beautiful Welsh pig, which then went on to win Best in Show. Lola the Landrace was not far behind by winning the 3rd place in that class just behind Harriet.

The judge Steve Loveless is checking Harriet’s teats to see how many piglets she could feed. 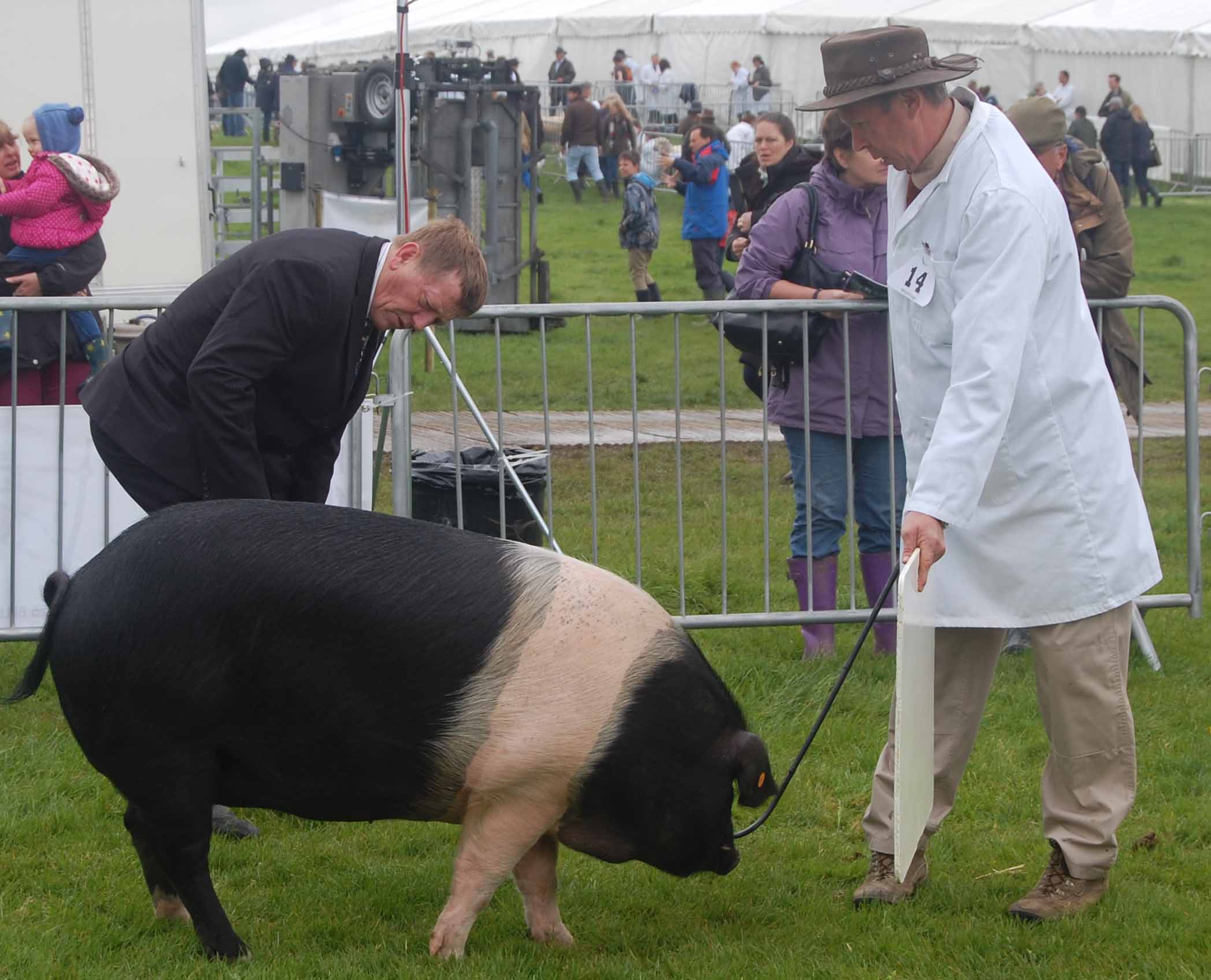 Our Landrace gilt, Lola is now gracing the cover page of Modern Farmer. 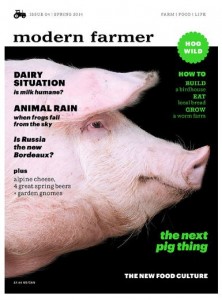 This follows a photo shoot in January, when photographer Richard Bailey came down to the farm to take photos of many of our breeds.

Many of these other shots feature in an article inside the magazine.

We’re hoping that this early stardom doesn’t affect her, and that she’ll learn to cope with all this attention.

After our show success with the pigs last year, Clare has gone up a notch by judging the final of the gamekeepers working gundogs in the main arena of Crufts on Sunday 9th March 2014, shortly before the main best in show.

Clare said ” It was all a bit scary standing alone in such a large arena surrounded by thousands of knowledgeable people. I think I’ll stick to pigs in a field at the agricultural shows”

A mammoth photo session took place to capture portraits of six different breeds of pig. London photographer Richard Bailey, set up his studio in one of our barns and we attempted to get a variety of pigs standing still on the right spot, looking the right way. Needless to say, the session took quite some time and a lot of bribery food. The most co-operative pigs were in fact a couple of litters of babies, who stood relatively still once you had turned them all around the right way. The pictures are destined for an American magazine. 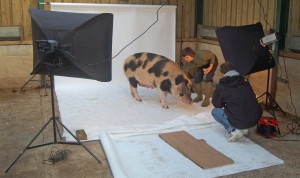 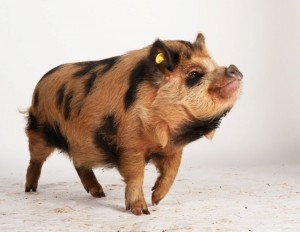 Oaklands Pigs attended 7 shows during the 2013 season and came home with 3 Best in Shows, 2 Reserve Best in Shows and 1 Breed Champion, so only missing out on a top spot at one show.

The Best in Shows came from Heathfield, Cranleigh and Edenbridge. The two Reserves from Singleton and Egham. And the Breed Champion at the large South of England show.

Vera the Saddleback will now be putting her feet up and awaiting the arrival of her first litter, which is due in the autumn. Hopefully she can produce a show champion for next year. 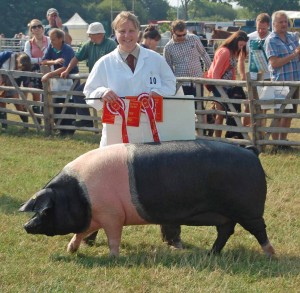 Vera, our Saddleback Gilt, won another Best in Show at the Cranleigh Show on 3rd August. The pig numbers were down at the show as it had moved to the Saturday to avoid the London 100 mile cycle event, but this did mean that it clashed with another large pig show at Stoneleigh Park. Vera joined the grand parade of cattle and sheep in the main arena to collect her trophies, but hitched a ride in the groundsman’s trailer. Although Vera took the honours the rest of the team also did well with Oaklands pigs winning 3 out of the 4 classes and therefore having three of our pigs competing for the Best in Show slot. 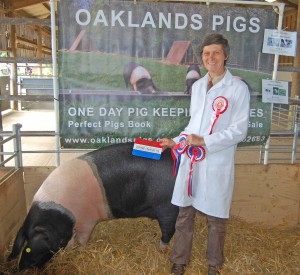 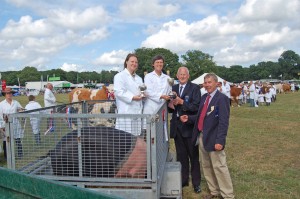 We took three different breeds to the Singleton Rare Breed Show and won Best of Breed with all three of them. First up was GLADYS the Gloucester old spot (at the front of the picture). She  came 2nd in a strong adult sow class and also took the award for Best Old Spot. Next up was TALLULAH the Tamworth in the July Gilt class. After entertaining the crowds with her usual run around the ring chased by her owner trying to catch her up, she took the Best Tamworth award.

Also in the July Gilt class was our Saddleback VERA, who won the class and was also awarded Best Saddleback. She then went on to win Reserve Traditional Breed Champion.

The weather was extremely hot and we had to pour water over several pigs in the show ring to ensure that they did not overheat. With all the marquee flaps open we managed to get a good breeze through the pig marquee. So all in all a good day out.

Meet Margo & Gerry the new Kune Kunes from Hampshire who have just arrived this week. Margo is the ginger with black spots and Gerry (a castrated male) is all ginger. They have plenty of grass in their pen, so that should keep them busy for months. 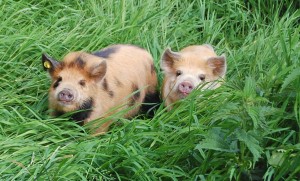 After winning Best in Show at Heathfield, Vera went on to take Breed Champion at the South of England show. This was a much bigger show with well over 100 pigs entered. We were also delighted that our big breeding sow Hilda took the Reserve Female Champion. 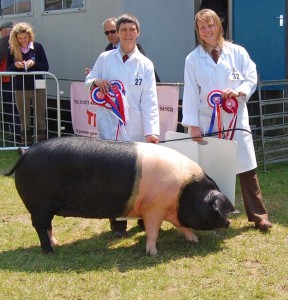 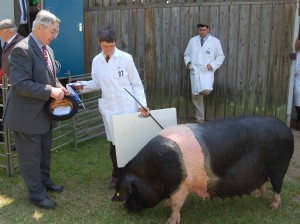 Surrey County Show hold a number of novelty classes as well as the serious showing side.

Vera, our Best in Show pig from Heathfield show, only managed to come second in her class. The first being taken by a lovely Welsh pig, who went on to win Best in Show. We did redeem ourselves in the novelty classes, with Tallulah the Tamworth (pictured) winning 1st in the pig most like it’s handler, thanks to a baler twine costume and some cardboard ears sported by Clare. Tallulah also came 2nd in the Happiest pig class by charging around the ring, as only Tamworths can do. Other novelty prizes included Delilah winning grumpiest pig by refusing to move and whining throughout the class. And Vera won the pig that the judge would like to take home. 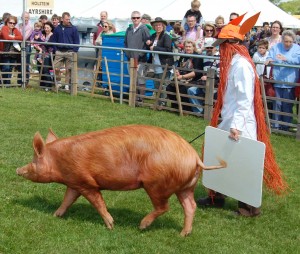 Oaklands Pigs won Best in Show at the first show of the season with their British Saddleback Gilt born in July 2012. It was a busy day with their Boar born in July last year and their Boar born in September last year, also winning their classes and contending for the champion spot. We had to rope in other exhibitors to help us get all our pigs into the Championship run off. But it was worthwhile when Vera went on to take the top place. 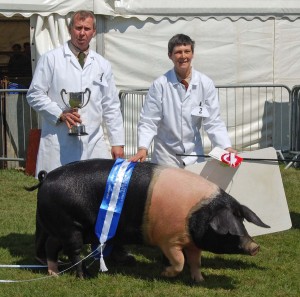 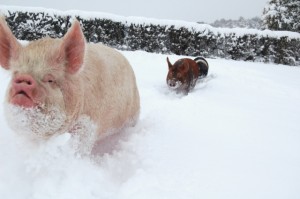 Snow has reached the South East again. Good job the pigs enjoy playing in the snow. We make sure that they have a nice warm ark to get into, with plenty of straw. Although keeping dozens of water troughs defrosted is an all day job. Hopefully the sunshine will be out soon.

A new trio of Oxford Sandy and Blacks have just arrived from Cornwall. The girls Martha and Mavis are sisters from the Mary Bloodline and the boar Henri is from the Clarence bloodline. They will join the other 4 Oxford Sandy’s already at Oaklands Pigs 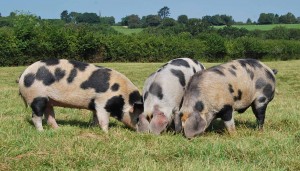 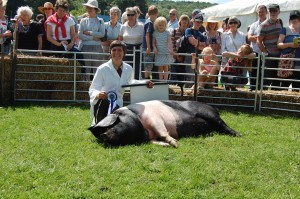 Hazel has a lie down after winning Reserve Champion 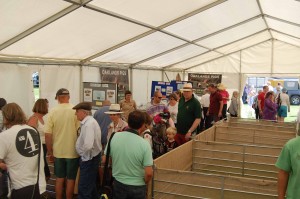 We took five pigs to the Singleton Show including three saddlebacks, an Oxford Sandy & Black and Tabitha our popular Tamworth, who spent much of the day enjoying being stoked by the public. 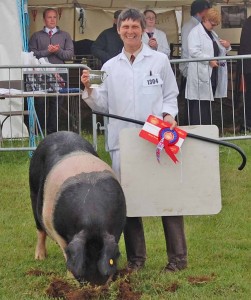 Oaklands Pigs were in great form at the Surrey County show on the May Bank Holiday Monday, with our saddleback sow Hilda winning Best in Show. We also scooped 1st and 2nd in the July gilt class, with Hazel a saddleback gilt taking 1st and competing alongside Hilda for Best in Show. Then Chestnut an Oxford Sandy Gilt taking the 2nd spot making her the best Oxford at the show. Not to be out done by her mother, Hilda’s daughter Hyacinth born in January this year came 2nd in her class. And the whole day was rounded off by Amy, our 5 year old saddleback sow winning the Veteran class. 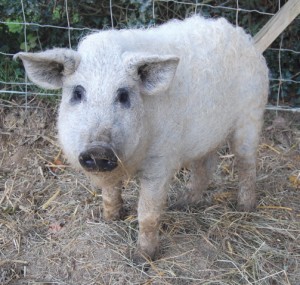 The Latest addition – a blonde mangalitza

END_OF_DOCUMENT_TOKEN_TO_BE_REPLACED

To the Edenbridge and Oxted show at the weekend, and we got a first for best breeding sow! END_OF_DOCUMENT_TOKEN_TO_BE_REPLACED